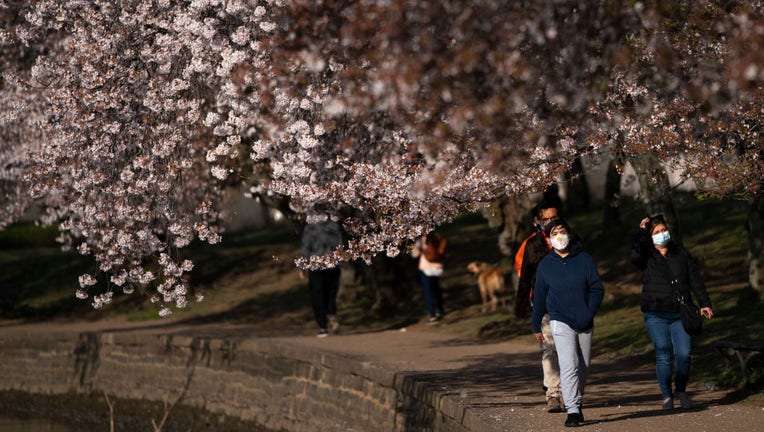 WASHINGTON – Mental health has been central to many since the pandemic began. With stress and anxiety seemingly high all the time for most in relation to daily life, a new health survey is examining ways people can improve their quality of life.

The 2022 Healthy Now survey from Parade Media and Cleveland Clinic surveyed 2,021 people 18 years and older to share their perspectives on improving their mental health. According to the survey, 46% of Americans say they maintain or improve their mental health by taking multiple 5- to 10-minute breaks to help relieve stress, depression, and anxiety.

Results from the survey show that Americans still struggle with their mental health with anxiety and depression among a number of factors. Approximately 37% of respondents rated their current mental health as average or low. Forty-five percent surveyed said they struggled with anxiety, 36% said sadness and depression, and 34% cited anger at least once a week in the past month.

“I think we’ve all gone through the collective experience of trauma over the last few years between the pandemic, racial injustice, the war in Ukraine, there are so many things that affect the mental health of people that we know the most. of people seeking mental health treatment report. anxiety is that I think a lot of people have different stressors and worries., “Drs. Kia-Rai Prewitt, Ph.D., a psychologist who works at the Center for Adult Behavioral Health at the Cleveland Clinic, told FOX Television Stations on Wednesday. “We also get a lot of people with depression, so they’re sad, they can feel hopeless and overwhelmed, so there’s a lot of people struggling right now.”

RELATED: Stressed: 4 out of 10 women have reached their ‘breaking point,’ the survey says

One cause of low mental health in some surveyed is the lack of activities such as exercise to improve mental health. The survey found that 37% of respondents did not exercise regularly or spend time outdoors, compared with 52% who rated their mental health high.

In addition, the people surveyed, who rarely or never participated in activities to help their mental health, were said to be very busy (34%) and the duties of caring for a loved one ( 36%) as factors. Approximately 24% of individuals say they do not know how to support their mental health.

Survey respondents, who said their mental health, credit quality rest, movement, and interaction with others were strong as activities that help strengthen their mental and emotional health.

Short breaks during the day can help

Seven in 10 Americans (70%) surveyed believe that taking shorter breaks throughout the day is more beneficial for their well-being than a 30- to 60-minute break, according to the survey.

RELATED: The connection between inflation and mental health

“I think the benefit of taking a lot of rest throughout the day is that it breaks the monotony it also helps to get up and stretch,” Prewitt said. “If you’re in the office it can help to go and talk to a co-worker to breathe and walk for a while. If you’re working from home it can help to close your eyes for a minute and practice 60-second meditation is just for self-scanning to see if you need to take care of other needs you don’t pay attention to while you’re working. ”

Mothers have more difficulty when it comes to their mental health because of the number of responsibilities they have to take care of compared to men. Nearly one in three mothers (32%) say they do not or rarely spend time improving or maintaining their mental and emotional health.

“I think for a lot of moms they’re used to doing things and they have a lot on their plate and even if you can find guys with a lot of responsibilities at home,” Prewitt said. “Women still do most of the household chores, still do most of the babysitting in addition to work and can feel overwhelmed and impossible to rest.”

Prewitt said she tells women facing mental health challenges to prioritize their needs in addition to caring for others. “It’s hard for a lot of women but I frame it that taking care of yourself is important. If you don’t take care of yourself it’s hard to take care of other things. Is to give yourself permission to pay attention. to your own needs and to the compulsion about asking for help when it is also needed. “

Prewitt concludes by offering a suggestion to women who feel they don’t have time for a short break to take a minute into their day to recharge their battery before proceeding to the next task.

“One thing I suggest to women is to spend a thoughtful minute or 60 seconds between activities. Breathe,” Prewitt said. “One thing I suggest is to give themselves permission to spend 60 seconds in between activities just to sit and observe themselves, observe the surroundings and by doing that. it allows them to recharge so hopefully whatever stress they get from the previous activity they don’t carry. to the next activity. ”

There is a mixed bag of survey results when it comes to working professionals and their mental health. Because of the demands and difficulties of work-life balance for parents who are working professionals, they report higher levels of mental and emotional health than non-working parents.

Approximately seven in 10 (69%) of working parents said their mental and emotional health was strong, compared to 55% of non-working parents. According to the survey, working parents are more likely to feel happy, satisfied, refreshed, and productive each week.

Men and women have different views on sex and their mental health. According to the survey, men are more likely to find sex rejuvenating after a long day (54%) than women (36%).

When it comes to father and mother, there is a difference. Sixty-five percent of fathers said sex was transformative, compared to 44% of mothers. However, some women surveyed said they found solitary activities to be healthy, including reading a book (63%) or lighting a candle (48%).

60-second breaks can be beneficial

Prewitt suggested women and others who felt they didn’t have time to rest to spend a minute in their day to recharge their batteries before proceeding to the next task.

“One thing I suggest to women is to spend a thoughtful minute or 60 seconds between activities. Breathe,” Prewitt said. “One thing I suggest is to give themselves permission to spend 60 seconds in between activities just to sit and observe themselves, observe the surroundings and by doing that. it allows them to recharge so hopefully whatever stress they get from the previous activity they don’t carry. to the next activity. ”